True. I have always dreamed of myself as a traveler, rather than being a touch-and-miss tourist at popular destinations. There is a certain charm and mystery of being a traveler, of not knowing your destination to the tee, the joy of discovering new and uncommon spots, and to come back satisfied at the end of the day. I think all of us want to break free from our routine daily lives of hectic work and flow in the current of travel to faraway places. Malaysia has been on my travel planner ever since the advertisements of Tourism Malaysia – Truly Asia began airing on tv. South East Asia is the melting pot of nature, culture, heritage and technology. Malaysia is probably one of the oldest vacation destinations in Asia. There are innumerable things to exoerience in Malaysia but I would choose the best five among them in my trip.

The main attraction of Malaysia’s capital Kualalampur is the Petronas Twin Towers. They were the tallest buildings in the world from 1998 to 2004, and currently they are the tallest twin towers and fifth among the world’s skyscrapers at a height of 1483 ft comprising of 88 floors. The sky bridge connecting the twin towers is also the highest two storey bridge in the world. You can enjoy the 90 second adventure from the basement to the top floor via lift, of course if you don’t suffer from height-sickness! I’ve seen the towers many times in movies like Don and Entrapment. The chases have made me greedy for some adrenaline rush nearer the sky.

Petronas Towers also host one of the largest shopping malls in Malaysia, the Suria KLCC with superb and stylish interiors and glossy foreign brands, ideal for shoppers.

Since we are big foodies and love to try local food wherever we visit, Jalan Alor seems to be a must. An entire street lined with food stalls in the heart of the city – sounds exactly like Asia! The place bustles after sunset and the stalls are lined with lights and food, filling the street with surreal aroma. When in Rome, be a Roman. When in Malaysia, be a Malay. Though you will find stalls of Indian cuisine or Chinese cuisine, try the local delicacies like grilled pork, Banh Mi sandwich, Nasi Lemak, Nasi Goreng, Laksa or Tom Yum Goong. There’s plenty of seafood and satay preparations to please everyone. I’m dying to try an authentic Nasi Goreng after tasting several derivatives in various restaurants. I wouldn’t miss Jalan Alor for the life of me if I ever visit Malaysia. It sure seems to be a gastronomic delight. 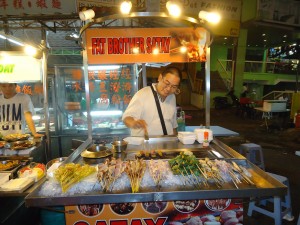 Langkawi is a duty free island in the state of Kedah. It is by far the largest island in Malaysia. The word means Reddish Brown Eagle in colloquial Malay. It was considered as a cursed island until it was revamped in 1986 to make it a tourist spot. It is now given a status of World Geopark by UNESCO. There are three national parks and lakes that comprise the Geopark. It is an island of mystery, myth and legend as described in the Tourism Malaysia website. The Langkawi Sky Bridge is of enormous interest to tourists.

Taman Negara literally means ‘National Park’ in Malay. It is a huge ecotourism park encompassing 3 states and estimated over 130 million years old. It is also one of the world’s oldest rain forests. Taman Negara hosts a biodiversity of flora, fauna and the famous Mount Tahan, the highest mountain in Malaysia. World’s largest canopy walkway is situated in this rain forest, ideal for bird watching. There’s a lot more to do, like jungle trekking and  walking trails along the Tahan river. I’ve always been fond of forests, though I haven’t had a chance to visit a rain forest as old as this one. The prehistoric experience is too interesting to give a miss, with the bonus of flora and fauna. 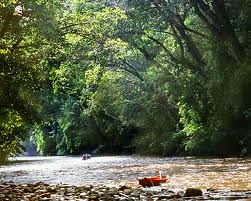 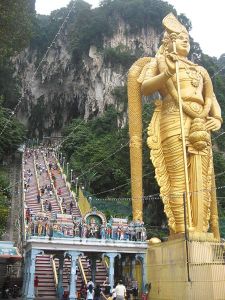 Batu is a limestone hill hosting a cluster of three limestone caves which has the legendary Batu Temple. It is a popular Hindu temple outside India, worshipping Lord Murugan. The 140 ft high golden statue is very famous and all of us must have spotted it at least in some movie or the other. There is a flight of 272 steps leading to the Temple Cave, the largest of the three. Batu Caves is Malaysia’s venue for the colourful Thaipusam festival. The limestone forming Batu caves is said to be 400 million years old, which is a phenomenon in itself. An added interest for Indians is the famous Ramayana caves. How intriguing is it to visit our own culture and history abroad!

That is all about my travel planner for Malaysia. I hope to make it real some day, imbibing the sights, sounds and tastes of the beautiful country.

I am participating in the MalaysiaJao Blogathon Contest in association with BlogAdda.com.