To elucidate the aroma of mutton curry wafting from the kitchen, especially on a Sunday afternoon is nearly impossible. It’s easier to cook the mutton than even give a try to illustrate the labyrinth of emotions it evokes in me, and most people of my race. It’s a phenomenon evolved over a hundred years and a tradition well worth preserving. Before drifting (and delving) into the history of Sunday mutton curry, let me add a cheeky disclaimer that ‘mutton’ refers to goat meat for every instance I write about it. Being raised in Bengal, I had no notion that red meat in general (lamb, goat, pork, beef) is referred to as ‘mutton’. For me, goat cannot be replaced with any other animal for ‘mutton.’ 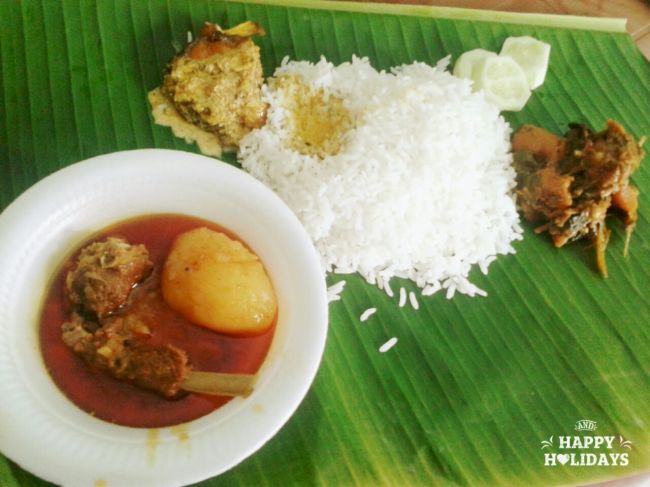 From lores narrated in both of my families over years and reading old Bangla stories, I’ve formed a hypothesis on the origin of Sunday mutton. In the early 20th century, educated folk from rural Bengal migrated to Calcutta (the only city then) in search of clerical occupation. They stayed mostly in rental accommodations, hostels and as paying guests for five working days. Come Friday afternoon and they’d venture for the ancestral home in different districts of Bengal. When they’d arrive home, mostly late at night, their jholas would carry fruits, candies, sweets for the children, an occasional piece of jewellery or saree for the wife and daughter, and – on frequent weekends – mutton for the entire family. Children would rejoice; I have a sneaking suspicion that they’d root more for the meat than frugal candies, like me. The wife would blush and begin preparations for the mutton curry the night itself or the next afternoon. Of course in monsoons, the mutton is replaced with Ilish, but that doesn’t take away its glory in the other seasons.

My maternal grandfather, dadu as I called him, worked at Martin Burn & Co. in Calcutta. He had a large family to fend for – his wife, father, brothers, their families and three children of his own. Despite the hardship, he had begun the tradition of Sunday mutton for his entire household in Calcutta. His sole sister would also drop by almost every Sunday with her unruly children from their South Calcutta home for breakfast and lunch. She was hugely rich and yet, it was her way of asserting foot in her paternal family, for the fear of losing it (the share I mean) later. Besides, she loved her brothers and probably was too wary of her sons who would create a ruckus in each waking hour. The luchi-alu chochhori and Sunday mutton at her paternal home was the breather she managed each week. Growing up with a handful of cousins and the ritual of Sunday mutton, my mother missed it hugely when she married and moved to Kanpur. You cannot compare the succulence of goat meat in Bengal and in a dry region like Uttar Pradesh. They had it occasionally, whenever the meat quality was satisfactory and they could afford it. My father had lived in hostels all through till college and later for his job at Kanpur. He was oblivious that a tradition of Sunday mutton existed at all.

When we moved to Calcutta, Sunday mutton began to appear in our menu with a fervent. Ma was happy, I was beyond happy. And then baba, rather young in his life, was consumed by the fear of red meat and cholesterol. This induced a replacement of Sunday mutton by something frivolous called chicken. The scenario wasn’t similar at my in-law’s though. My husband M’s paternal grandfather was one of the officers who stayed in Calcutta to work for five days and come home to North 24 Parganas on weekends with goodies. Father-in-law grew up with Sunday mutton and carried the legacy when his father expired. It was easier for him as mother-in-law doesn’t eat chicken, being a Brahmin. M has been lucky enough to have had Sunday mutton with religious perseverance, and has a lot of anecdotes related to his love for mutton. If his father was due to work on a Sunday, little M would be spotted glum with a few tears on Saturday evening. Not because the gentleman termed father will be away on a Sunday, but for the dread of the absence of Sunday mutton. It hasn’t changed much over the years, he still gets foggy if Sunday mutton is denied for any incomprehensible reason.

We have tried to observe the ritual for as long as we’ve been together, replacing goat meat with lamb in the United Kingdom. One of the reasons of not shying away from cooking mutton each Sunday are the memories. The tradition has bound every family together, at least for each Sunday lunch. Ma and her siblings would loiter around the kitchen to catch a glimpse of their cook Putul cooking Sunday mutton. M used to sniff his mother’s saree when she came to the bedroom for a breather while cooking mutton on hot humid Sunday mornings. The best part of this item is that it teaches you a lesson in providence. Our families have been devouring 300 g of mutton each Sunday, with mostly the jhol and potato chunks to carry forward to dinner. Mothers have mastered the art of cooking Sunday mutton jhol (curry) in such a way that the aroma, a wedge of lime, pieces of whole potato and just a few hunks of meat can elude you into polishing off a plate of rice. It has been a lifeline for economically challenged families to draw little smiles across the faces of their children on rare Sundays.

Why Sunday? The family used to stay together after a week of toiling at work and household chores. Children didn’t sit down to solve arduous Maths problems on Sundays, mothers were content with serving a sumptuous mutton jhol to their wards, fathers were content with the glee that mutton induced in their families. Sunday was a celebration for middle class Bengali with few tens of rupees and a pola of mustard oil to cook a little mutton. We still buy 300-500 g each Sunday and devour it for two meals. The soft potatoes doused in a mild jhol with a dash of green chilli and aroma of the meat are enough to last the dinner. M is still juvenilely joyous if he gets enough alu-jhol while I steal pieces of meat from the pressure cooker at lunch.

Mutton is not bad. Nothing is, if you have in controlled portions and moderation. Think about the happiness that would glide through the house on a Sunday, floating from the kitchen to bedroom, touching each member with different degrees of love and a sense of togetherness, of cooking for each other.

(will be continued)…with Sunday mutton recipes from my families.

7 thoughts on “The Legacy of Sunday Mutton”