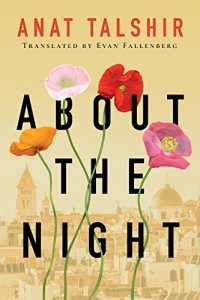 On a hot summer day in 1947, on a grandstand overlooking Jerusalem, Elias and Lila fall deeply, irrevocably in love.

Tragically, they come from two different worlds. Elias is a Christian Arab living on the eastern side of the newly divided city, and Lila is a Jew living on the western side. A growing conflict between their cultures casts a heavy shadow over the region and their burgeoning relationship. Between them lie not only a wall of stone and barbed wire but also the bitter enmity of two nations at war.

Told in the voice of Elias as he looks back upon the long years of his life, About the Night is a timely story of how hope can nourish us, loss can devastate us, and love can carry us beyond the boundaries that hold human beings apart.

Firstly, I had never imagined that I would ever read a book that was originally written in Hebrew! There’s a joke in Bangla that implies Hebrew is the most difficult language in the world. Nonetheless, this is a translation into English and doesn’t retain the complexities of Hebrew. I am pleasantly surprised that I discovered this beautiful book late, but all thanks to Amazon Prime Reads for promoting translation literature. There are some out of the world great books to be read in this series.

1947. The year that we Indians associate with our freedom and the struggle before and renaissance after. I, for one, had the least idea that much turmoil was happening in Jerusalem as well. Apart from a city amidst the Israel-Palestine conflict, Jerusalem was the city of birth of Jesus Christ to me. The tussle between Jews and Arabs which reached its pinnacle after the World War affected Jerusalem the most. About the Night begins with the conflict and the whirlwind that it creates for two lovers who meet by chance.

Lila Cassuto, an Israeli Jew and Elias Riani, an Arab Christian, fell in love in Jerusalem while hell was breaking loose upon the city. Elias, a tea merchant is a stout Arab who holds on to his love till his last breath. While war begins, walls are created to divide Jerusalem into Jewish and Arab parts, Lila and Elias wait on both sides, their love still strong and alive in their hearts. They exchange letters, secretly, to let each other know that they’re alive. Days pass, then years, Elias gets married and meets Lila again. The way they sustain their love through gigantic hurdles is worth a lesson for anyone who doesn’t believe in love.

I’m pretty impressed by the writing style of Anat Talshir. Though it is impossible to gauge the original flavour from a translated text, if the essence still emanates from a book, it is the translators credit and a superb achievement. Evan Fallenberg has done a great job if I’m able to judge properly as I could picture Jerusalem, Lila and Elias as they were meant to be. The political conflicts are well explained in the book, but the era is perfectly captured in all manners. The narrative is a beautiful kaleidoscope of food, fashion, mindset and people of the era depicted in the book. It was quite an eye opener for me as I learned more and liked Jerusalem. I would definitely read more books about the Jew-Arab conflicts and about Jerusalem as a city.

Recommended for anyone who loves a good romance.

Anat Talshir has been one of Israel’s most distinguished investigative journalists for over thirty years. She has hosted a television show on current affairs and taught creative writing at the College of Management Academic Studies. Talshir has written and produced several documentaries, including the award-winning program Israel’s Next War?

In 2002 she was awarded the Nahum Sokolov Prize for best journalism (the Israeli Pulitzer). Talshir is currently working on her second novel.

Evan Fallenberg is a US-born writer and translator living in Israel since 1985. He is the author of the novels Light Fell (2008), When We Danced on Water (2011), and The Parting Gift (2018) and has translated novels, plays, short stories, librettos, and screenplays by leading Israeli authors. Fallenberg has won the American Library Association’s Barbara Gittings Stonewall Book Award as well as the Edmund White Award for Debut Fiction. He has been short-listed for the PEN Translation Prize and the Times Literary Supplement Risa Domb/Porjes Prize for translation of Hebrew literature. Fallenberg teaches at Bar-Ilan University and City University of Hong Kong, and serves as an advisor to several literary prizes, including the Sami Rohr Prize for Jewish Literature.

Buy this book from Amazon via the link and show some love!

I am taking my blog to the next level with Blogchatter’s #MyFriendAlexa.

108 thoughts on “Book Review : About The Night” 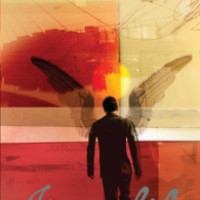