She was hiding behind her dad’s blazer, inside the huge walk-in closet. Dad was probably in the next room, searching for her, calling her pet-name, Pori (fairy). They were playing hide and seek within their big old mansion in Calcutta. Her grandfather bought it when he migrated with his family from Khulna  (erstwhile Bangladesh). She loved to hear those stories from grandpa, when he was around. Dad was coming closer, he’d probably find her this time, and she would lose the game. Oh no! She wrapped her face tightly with the coat-tail, hiding like a rabbit. Somebody opened the closet door, and tried to move aside the wrap from her face. She was resisting him, she didn’t want to be discovered. The person persisted in his endeavours though, calling her by some other name. What was it, Zoya? Nah, that must be somebody else. She was only Pori, her dad’s princess. She had to open her eyes after constant nudges and shaking’s, only to find Sid lounging over, trying to move the comforter from her face.

“What happened Zoya? You had that dream again, didn’t you?”
“Yes babu. Again. And again….Hai Allah!”
Sid sat on the rim of the bed-post, taking Zoya into a very caring embrace. Ah, it’s always so much peace being in his arms.
“What’s the time?” asked she.
“Well past the alarm. Get up now, or Babui will be late for school.”
She looked up at him and said with a twinkle, “Can’t it be a Sunday today?”
The expression on his face made her laugh instantly.
“Alright, I know it’s only Tuesday!”

Babui, or Ishaan, their five year old son, was his usual self at breakfast.
“I don’t wanna drink this milk mommy. It smells like a cow.”
“Don’t be difficult beta. You’re already late.”
“But it really smells like a cow, trust me!”
“Babui, you’ve never smelt a cow. Now shut up and finish everything in five minutes. Dad’s ready to drop you at school.”

Zoya started getting ready after they left. She had two surgeries and a monthly committee meeting on her schedule for the day. Damn those meetings, they’re ever so futile! Can’t she bypass this one by any way? She wanted to be on her own today. This recurring dream always drifted her away from the world for quite sometime. She remembered everything while driving to the hospital. It began with Sid. Or even before that? She had come to USA after an MBBS in Calcutta, to pursue her dream specialization, cardiology. Her dad wasn’t very enthusiastic about it, but somehow he agreed. Sid was at the same university for a doctorate in architecture. They didn’t know each other. Zoya noticed him for the first time after about a year, in the campus bus. He was reading a book. And his eyes awed her whenever he lifted his glance towards the window. They were so deep, dreamy, yet dependable. She couldn’t take her eyes off him, though she felt it was so awkward. He had noticed that too, and was amused. Some days later they were waiting at the same bus stop, and Sid introduced himself.

Despite the differences, their love blossomed like an intricate lotus of thousand petals. And it’s fragrance filled up every drop of their lives. It was a bit easy to interact for a shy person like Zoya, Sid being a bengali too. Well, her name is a very unusual one for a bengali girl, but her dad chose it carefully while naming her. He was a scholar in ancient literature. Zoya means “life” in Greek, and indeed, she was life for her parents. Sid’s family was settled in Delhi and that’s where he was brought up.
They completed their degrees together, and then the inevitable question came up. Marriage. Zoya knew what she would have to go through, and the mere thought kept driving her to depression. Her father would never approve of marriage to a indu. NEVER. He was extremely orthodox about religion. She wished her grandfather was alive, he would have understood. So did her mother. Zoya had broached the subject to her indirectly to see her reaction. Her mother seemed fine with the idea, but reminded her of dad. Sid wanted her to take the final decision, his family was completely fine with the matter. Zoya was torn into a zillion pieces, when she had to take a decision. Dad had reacted very predictably, and said he would sever all ties with her if she marries a Hindu. Her mother, turned out to be an exceptionally strong woman. She advised Zoya to do just what she thought would be right. It wasn’t easy for the princess to let her dad go, but she knew Sid and herself couldn’t live without each other. It was impossible.
They went to Calcutta before and after marriage, but dad didn’t even see her. He had disowned her from his life, and had shut himself up into a melancholy shell. It made her heart bleed and she wondered if they would be happy in their lives, hurting dad in this manner. But her mother and Sid’s family were great support. They came back to USA, and almost settled there. It’s been ten years and Babui since then.

After her final surgery for the day, Zoya relaxed in her office with a coffee, and switched her mobile phone on. It said three missed calls from Sid. Wondering if something was wrong, she called him.
“What happened, Sid? I had two back to back surgeries.”
“Yeah, I remembered that after I called you.”
“But what happened?”
“I’ve got a grand news for us, and I can’t wait to tell you until we reach home! Did you call the daycare? Has Babui reached safely?”
“Yeah I called. He’s fine.”
“Alright then, can you meet me now, or a while later for a coffee?”
“Hmmmm…I guess so. Just have to go for a round, and I’m done for today.”
“Great! So meet me you-know-where, an hour later may be?”
“God! I’ve seldom seen you so excited!”
“You’ll know why soon!”

Zoya found Sid already in the coffee shop, fidgeting with his mobile phone impatiently. She sat at his table and looked at him expectantly. He had a wonderful smile on.
“What?”
“You won’t believe it! I had an unscheduled meeting with the managing director today. Our company is collaborating with a leading Indian construction company for a huge 5 year project of building hospitals, shopping malls and factories all over India. And they want to send me as head of the eastern zone. Guess where we’ll be based?”
Zoya stared at him silently. Her mouth was drawing firm lines.
“No.”
“Come on moni, it’s been long long time. We ought to try again.”
“No.”
“Moni, listen to me. This is a big opportunity for us to go back to where we always wanted to, and resolve our differences. I’m sure this time he’ll forgive us. At least if he sees Babui.”
“Sid, how can you be so impractical? Don’t you remember what happened then? It’s impossible. He won’t ever forgive me. And I won’t be able to live in the same city with so much pain.”
“Please moni, trust me. We gave up all these years because we had to build our lives. Now we’re more established. Let’s try again. I’ll do everything I can. Anything he would ask me to. I can’t see you in so much pain always, with those dreams that make you bleed. Your guilt, which is more mine. I feel like I’ve torn you apart from your father. Let me at least try to re-unite you. Won’t you help me moni? Please?”
She sat there speechless, tears formed clearly in her eyes, dropping down one by one from her cheeks.

Zoya had cramps in her stomach before their touchdown at the NetajiSubhash airport. She was holding Sid’s arm tightly. Her hands were freezing cold. Setting foot in Calcutta was so much homecoming, that it made her lost completely into memories. This was the city where she grew up, it was home, it was hers, every part of it. Babui wassurprized to find his mom so different. They moved in to a brand new apartment provided by Sid’s company. It wasn’t far away from her home. Her mother was over the moon at the prospect of seeing her after so many years, and Babui! Sid was hopeful of a reconciliation. And Zoya…she was dazed at all these. She wanted to tell dad how much she missed him all these years, and that she was still his princess, his pori. She prayed to God harder, incessantly as she’s been doing that for the past 10 years.

Finally, they were standing at the doorstep of her house, all three of them, waiting for it to open. Zoya felt he won’t see her even this time. Her heart sank. She wanted to barge into his room and cry her heart out. Sid was holding her firmly, she had become so weak. Even Babui was holding his mother’s hand tightly in anticipation of something.

Her mother opened the door. Zoya expected her to say the obvious. Before she could say anything, they heard a parrot blurt out from inside the house, “Pori, Pori, Pori…welcome home.”

*This story was published in Induswomanwriting* 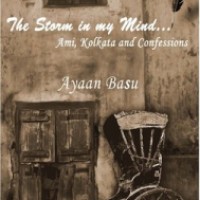 © 2010-2017 All Rights Reserved © all written content published in this site is owned by Priyanka Roy Banerjee, unless mentioned otherwise. You may not Copy, reuse or redistribute the content without the permission of the license holder. All photos/videos and links in this blog are from the internet, unless mentioned otherwise. If you find any content (barring the text) copied from anywhere in the internet, most likely it was unknowingly put here. Please let me know if there is any copyrighted content here and I will remove/credit it.
VR & G